Infrastructure today has grown beyond the physical confines of the traditional data center, has spread its wings to the cloud, and is increasingly distributed, virtual, and abstract. With the cloud gaining wide acceptance, most enterprises have their workloads spread across data centers, colocations, multi-cloud, and edge locations. On-premise infrastructure is also being replaced by Hyperconverged Infrastructure (HCI) where software-defined, virtualized compute, storage, and network are in one single system, greatly simplifying IT operations. Infrastructure is also becoming increasingly elastic, scales & shrinks on demand and doesn’t have to be provisioned upfront.

Let’s look at a few interesting technologies that are steering the modern IT landscape.

Traditional application deployment on physical servers comes with the overhead of managing the infrastructure, middleware, development tools, and everything in between. Application developers would rather have this grunt work be handled by someone else, so they could focus on just their applications. This is where containers and serverless technologies come into picture. Both are cloud-based offerings and provide different levels of abstraction, in a way that hides layers beyond the front end, from the developer. They typically deploy smaller components of monolithic applications, microservices, and functions.

A Container is like an all-in-one-box, containing the app, and all its dependencies like libraries, executables & config files. The containerized application is highly portable, will run anywhere the container runtime is installed, and behave the same regardless of the OS or hardware it is deployed on. Containers give developers great flexibility and control since they cater to specific application requirements like the OS, S/W versions. The flip side is that there is still a need for manual maintenance of the runtime environment, like security patches, software updates, etc. Secondly, the flexibility it affords translates into high operational costs, since it lacks agility in scaling.

Serverless technologies provide much greater abstraction of the OS and infrastructure. ‘Serverless’ though, does not imply that there are no servers, it just means application developers do not have to worry about the underlying OS, the server environment, or the infra that their applications will be deployed on. Serverless is event-driven and is based on the premise that the application is split into functions that get executed based on events. The developer only needs to deploy function code and define the event(s) that will trigger them! The rest of the magic is done by the cloud service provider (with the help of third parties).

The biggest advantage of serverless is that consumers are billed only for the running time of the function instances or the number of times the function gets executed, depending on the provider. Since it has zero administrative overhead, it guarantees rapid iterative deployment and faster time to market. Since the architecture is intrinsically auto-scaling, it is a perfect fit for applications with undefinable usage patterns. The other side of the coin is that developers need to deal with a black box back-end environment, so, holistic testing, debugging of the application becomes a challenge. Vendor lock-in is a real problem since the consumer is restricted by the technology stack supported by the vendor. Since serverless best practices dictate light, isolated functions with limited scope, building complex applications can get difficult. Function as a Service (FaaS) is a subset of serverless computing.

IoT is about connecting everyday things – beyond just computing devices or smartphones – to the internet. It is possible to convert practically anything into an IoT device, with a computer chip installation & internet access, and have it communicate independently with the internet – without any human intervention. But why would we want everyday things like for instance a watch or a light bulb, to become IoT devices? It’s in a bid to bridge the chasm between the physical and digital worlds and make the environment around us more intelligent, communicative, and responsive to our needs.

IoT’s use cases are just about everywhere; in personal devices, self-driving cars, smart homes, smart workspaces, smart cities, and industries across all verticals. For instance, live data from sensors in products while in use, gives good visibility into their operations on the ground, helps remediate issues proactively & aids improvements in design/manufacturing processes.

The Industrial Internet of Things (IIoT) is the use of IoT data in business, in tandem with Big Data, AI, Analytics, Cloud, and High-speed networks, with the primary goal of finding efficient business models to improve productivity & optimize expenditure. The need for real-time response to sensor data and advanced analytics to power insights has increased the demand for 5G networks for speed, cloud technologies for storage and computing, edge computing to reduce latency, and hyper-scale data centers for rapid scaling.

With IoT devices extending an organization’s infrastructure landscape, and the likelihood that IT staff may not even be aware of all the IoT devices in it is a security nightmare that could open corporate networks & sensitive data for attacks. Global standards and regulations for IoT device security are in the works. Until then, it is up to the enterprise security team to safeguard against IoT-related vulnerabilities. 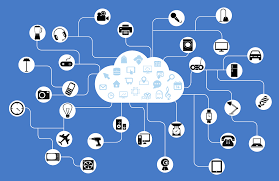 The ability of infrastructure to rapidly scale out on a massive level is called hyperscaling.

Unprecedented needs for high-power computing and on-demand massive scalability has given rise to a new breed of hyperscale computing architectures, where traditional elements are replaced by hyper-converged, software-defined infrastructure with a high degree of virtualization. These hyperscale environments are characterized by high-density server racks, with software designed and specifically built for scale-out environments. Since high-density implies heavy power consumption, heating problems need to be handled by specialized cooling solutions like liquid cooling. Hyperscale data centre operators usually look for renewable energy options to save on power & cooling.

Today, there are several hundred hyperscale data centers in the world, with the dominant players being Microsoft, Google, Apple, Amazon & Facebook.

Edge computing as the name indicates means moving data processing away from distant servers or the cloud, closer to the source of data.  This is to reduce latency and network bandwidth used for back & forth communication between the data source and the server. Edge, also called the network edge refers to where the data source connects to the internet. The explosive growth of IoT and applications like self-driving cars, virtual reality, smart cities for instance, that require real-time computing and analytics are paving the way for edge computing. Most cloud providers now provide geographically distributed edge servers. As with IoT devices, data at the edge can be a ticking security time bomb necessitating appropriate security mechanisms.

The evolution of IT technologies continuously raises the bar for the IT team. IT personnel have been forced to move beyond legacy practices and mindsets & constantly up-skill themselves to be able to ride the wave. For customers pampered by sophisticated technologies, round the clock availability of systems and immersive experiences have become baseline expectations. With more & more digitalization, there is increasing reliance on IT infrastructure and hence lesser tolerance for outages. The responsibilities of maintaining a high-performing IT infrastructure with near-zero downtime fall on the shoulders of the IT operations team.

This has underscored the importance of AI in IT operations since IT needs have now surpassed human capabilities. Gavs’ AI-powered Platform for IT operations, ZIF, caters to the entire ITOps spectrum, right from automated discovery of the landscape, monitoring, to predictive and prescriptive analytics that proactively drive the organization towards zero incidents. For more details, please visit https://zif.ai “Priya is part of the Marketing team at GAVS. She is passionate about Technology, Indian Classical Arts, Travel, and Yoga. She aspires to become a Yoga Instructor someday! “

What is OpenTelemetry and what it means for Observability?